Athletic Injuries to the Leg, Foot and Ankle

“So Jacob was left alone, and a man wrestled with him till daybreak. When the man saw that he could not overpower him, he touched the socket of Jacob’s hip so that his hip was wrenched as he wrestled with the man.”

Epidemiology
Sports injuries are incredibly common and most occur in the lower limb. There are estimated 350 ankle sprains in Sydney each day.

Diagnosis is often helped by history and examination.

A muscle that swells in it’s confined fascial space. Most common in the anterior compartment, followed by deep posterior, lateral and superficial posterior (Martens and Meyersons Sports Med. 9:62 1990).

Diagnose with measurement of resting and exertional pressures.

A muscle that swells in it’s confined fascial space. Most common in the anterior compartment, followed by deep posterior, lateral and superficial posterior (Martens and Meyersons Sports Med. 9:62 1990).

Diagnose with measurement of resting and exertional pressures.

Live with the pressures or have a fasciotomy.

A stress reaction alone with the postero-medial aspect of the tibia variously attributed to the fascia, periosteum or bone. A heterogeneous entity which may involve the attachment of soleus, periostitis beneath the tibialis posterior, a stress reaction on the tibia or even the flexor digitorum longus muscle overuse.

Diagnose with a bone scan and do not confuse with deep posterior compartment syndrome.

Modification of activities, NSAIDS. Role of surgery is controversial. Most surgical proponents combine a deep posterior fasciotomy with release of the fibrous arch of the soleus and claim 80% good or excellent results (Jarvinnen et al. Int. J. Sports Med. 10:55. 1989).

Occurs in middle aged tennis players who suddenly extend their knee with their ankle in full dorsiflexion. Manage with initial rest the stretching and strengthening to regain function.

Superficial peroneal the most common. Most nerves have been described such as posterior tibial, saphenous, sural and common peroneal as it transverses the neck of the fibula. Patients will describe a pain that is burning, tingling and often radiating.

A relatively rare entity that causes pain in athletic individuals. Cause is anatomical variations in the course of the popliteal artery leading to compression. Delaney and Gonzalez Surgery 69:96 1971). May be difficult to differentiate from exertional compartment syndrome. May produce a picture similar to intermittent claudication.

The most common orthopaedic injury. One per 10,000 population per day, ie 350 in Sydney today!

Mechanism of injury is a plantar flexion-inversion sprain.

I – Stretch
II – In between I and III
III – Complete rupture

Treat all non-operatively in my opinion (no significant difference between cast, operative repair and controlled early mobilisation) looking at re-injury, functional instability, range of motion, pain/swelling/stiffness, return to pre-injury activity.

Of interest is that the subjective and objective stability don’t correlate.

In workers compensation double these times.

Sources Of Continuing Pain Or Instability After Ankle Sprain

Osteochondral lesions of the talus 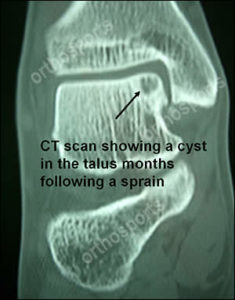 The Sequence Of Events Postulated Is:

Tuberosity fractures may or may not involve the 5th tarsometatarsal joint. Theories of aetiology include peroneus bevis avulsion and avulsion by the lateral fibres of the plantar ligament.

Most patients will give the history of an inversion injury.

Management is symptomatic. I recommend either a post-operative shoe or an aircast weightbearing. If the patient is in too much pain to weight-bear then a period non-weightbearing on crutches is suggested. Disability rarely lasts longer than 6 weeks. Non-union is rarely a problem as fibrous pseudoarthrosis is usually painless. For a displaced intra-articular fracture surgery should be considered.

Named after Robert Jones who in 1902 described a fracture he sustained whilst dancing (approximately three-quarters of an inch from the fifth metatarsal base”. He made no comment on the preferred method of treatment though stated that his disability was considerable. Vascular studies have shown this area to be a watershed and therefore the incidence of delayed/non union is explained.

The acute fracture is best treated initially with six weeks non-weightbearing in a cast. The majority of “fresh” fractures will heal with this regime. If union fails to occur then intramedullary fixation with a screw and a bone graft is suggested.

A common injury that is surprisingly frequently missed. Acute rupture most common in males between the ages of 30 and 50 “Weekend warriors” more often than trained athletes though not always the case. Painful prodrome is volunteered if asked.

Obvious? No! 25% are missed by the first treating physician.

History is characteristic and involves a sudden severe pain in the back of the ankle “like being struck with a tennis ball” with or without an associated loud pop.

Physical examination – feel for the gap.

CAUTION: DO NOT TRUST ULTRASOUND OR MRI… THE DIAGNOSIS IS CLINICAL.

The slide below shows a complete rupture of the achilles tendon at surgery – the ultrasound was reported as showing a partial tear. 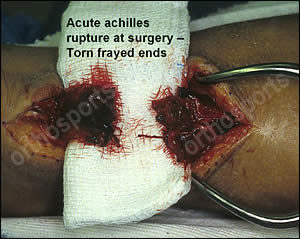 Controversy existed regarding operative vs Non-operative treatment. The considerations include ultimate strength, length, re-rupture and the sometimes disastrous complications of surgery. In general surgical reconstruction is favoured as the rate of re-rupture is less and the functional length of the tendon is easier to restore. In young athletic patients the re-rupture rate following non-operative treatment is unacceptable (10% vs 2%).

The rehabilitation is undergoing change and a trend is developing towards earlier mobilisation with better outcomes with respect to strength and rates of re-rupture.

Indications for surgery are persistent pain and weakness. The operative procedures are not without their morbidity and all operations are a compromise.

Described in the last 15 years

Far more common than pilon fractures and also much easier to treat. The mechanism of injury varies and was elegantly described in Lauge-Hansen in his classic series of articles in the 1950’s. The commonest ankle fracture is the so-called supination external rotation injury. The first word (supination) describes the position of the foot and the subsequent movements (external rotation), the mechanism of injury. Other common mechanisms are pronation-abduction and supination-abduction. These particular injuries produce characteristic fracture patterns according to the degree of injury.

The Dennis-Weber Classification is the most commonly used system because it is easily recalled, it pertains to the relation ship of the fibular fracture to the syndesmosis…

The AO group has dominated thinking about ankle fractures for the last 20 years. The fibular has been the focus of attention with early biomechanical work stating it’s weight-bearing role and the detrimental effects of even small alterations in it’s position (Ramsey and Hamilton [ii]).

Such an approach behooves the surgeon to operate on almost every ankle fracture as displacements of even 1 mm are not tolerated. Recent research is giving the medial side greater prominence and suggests that earlier concepts of the fibular as the main stabiliser of the ankle were erroneous (iii). Indeed, syndesmotic injury in the absence of medial injury has been shown not to affect talar displacement in a cadaver model (iv)

1. With an intact medial side no advantage has been shown (operative vs. Non-operative) in the management of isolated fractures of the lateral malleolus.

2. In bi-malleolar fractures, an anatomical reduction has been shown to correlate best with a successful outcome. This is of course most easily achieved surgically according to AO principles of rigid internal fixation with early joint mobilisation.

3. In Weber C injuries (with medial disruption) a syndesmotic screw should be considered in injuries > 3 cm above the plafond. Use a 4.5 mm screw engaging 3 or 4 cortices and not lagged.

4. In posterior malleolar fractures involving > 25% of the joint, anatomical reduction is recommended. I prefer the posterolateral approach with the patient in the lateral decubitus position.

Stress Fractures of the Foot and Ankle