Commonly known as bunions, this is a very common condition affecting women to a far greater extent than men. The proposed etiology is shoewear. Studies done in un-shoed populations in Africa and in the Hong Kong Chinese have shown that the normal shape of the human foot is splayed in the forefoot region. The adaptation where the great toe sits next to the 2nd toe is felt to be due to shoewear.

Bunions often run in families. It is uncertain as to whether this is a genetic predisposition or an inherited shoewear tendency.

Often in the initial stages they are painless and symptoms only occur in tight or high heeled shoes. In the later stages the big toe can press on the 2nd toe producing interdigital corns. The big toe may also pass underneath the 2nd toe causing the 2 nd MTP joint to dislocate.

Bunions usually are investigated by taking x-rays, which ought to be taken with the patient standing.

The non surgical treatment involves using wider or deeper shoes. Topical anti-inflammatories can be useful, and if the structures on the inside are being stretched, then a toe separator can sometimes be helpful.

The role of insoles in bunions is somewhat controversial. Some patients with flat feet do have accentuation of their deformity with weight bearing, and in these patients an arch support may help.

The definitive treatment for bunions, however, is surgical. In general one has to move the bone and re-align the joint, rather than cut pieces out of the foot.

The surgery is generally well tolerated, and requires one night in hospital for one side and two nights in hospital for two sides. Following bunion surgery patients have to wear a wooden shoe for a period of six weeks and can expect swelling in this foot for approximately six months.

The surgery, in general, is successful 85% of the time and following bunion surgery two-thirds of ladies can wear any shoe of their choice.

The complications include, but are not limited to, anaesthetic problems, infection, bleeding, blood clots, damage to nerve, blood vessel or tendon, incomplete relief of symptoms or recurrence of symptoms.

Any of these complications may require further surgery. 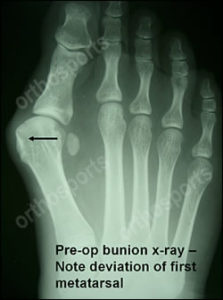 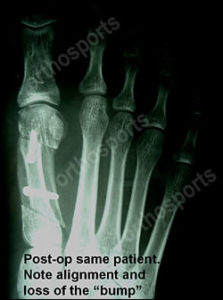